The Qiling emulation framework was built with the goal of emulating shellcode from various operating systems due to the ever-increasing amount of complexity of shellcode, as xwings stated in his talk at ZeroNights 2019. The framework, however, evolved into a binary instrumentation and binary emulation framework that supports cross-platform and multi-architecture where multiple architectures (such as ARM and x86), operating systems (such as Windows and Linux) and file formats for loading binary code (such as ELF and Portable Executables) are supported.

While looking at ways to contribute and improve coverage for the Windows operating system APIs it has been difficult to trace execution flow within a binary that is calling specific APIs that I would like to emulate. Fortunately, @assaf_carlsbad submitted a PR which would do exactly this with DRCOV-compatible code coverage collection. This, however, was limited to the Portable Executable UEFI loader, so I decided to add support for the Windows Portable Executable loader with the following changes:

This, in turn, provides code coverage for any Portable Executable image loaded by the loader (including DLL dependencies) and will cause each basic block executed to be logged by the block_callback function when tracing is enabled:

I had left this blog on the backburner for a while, and later found that xwings had already added this for PEs in June, so I submitted a PR to add the DLL coverage as well.

The defacto standard for visualizing code coverage in IDA Pro and Binary Ninja is a plugin called Lighthouse, which I’d highly recommend checking out if you’re reverse engineering using these disassemblers. During my off-time, I’ve been trying to use Ghidra, which has a great disassembler and decompiler, and provides a plethora of features that are missing from IDA Pro. Once you get used to its quirks, it’s a fantastic free and open source software reverse engineering suite. I came across a fantastic plugin called Dragon Dance which provides similar functionality to Lighthouse for visualizing code coverage within Ghidra, and most importantly for this post, supports the DRCOV trace format. It supports a number of built-in references which let you do things like diff traces within the highlighted syntax. Here’s a nice depiction from the README of using the scripting interface with these functions:

In addition to this, Dragon Dance supports fixups, which essentially looks at the coverage integrity within the binary and compares this to instructions which have been disassembled by Ghidra. If these differ, then the plugin will prompt the user to fix these areas which Ghidra missed. Here’s a depiction of this below, also from the README:

Putting It All Together

Now that we have Portable Executable trace coverage, and a way to visualize it within a reverse engineering suite, let’s take a look at an example. Qiling comes with a WannaCry binary which we’ll use to demonstrate code coverage here. First, I needed to follow the build instructions within Dragon Dance, which were very straight forward, in order to build and install the plugin. Once this was done and I had it working in Ghidra, I ran qltool with the WannaCry binary and tracing enabled:

A few options to make note of that are passed to qltool:

As you can see, the infamous killswitch URL hxxp://www.iuqerfsodp9ifjaposdfjhgosurijfaewrwergwea[.]com was passed to InternetOpenUrlA within our emulation run. Now, let’s import this trace into Ghidra using Dragon Dance and see what it looks like. Once the plugin is installed, we can open the plugin window from the Window dropdown within Ghidra: 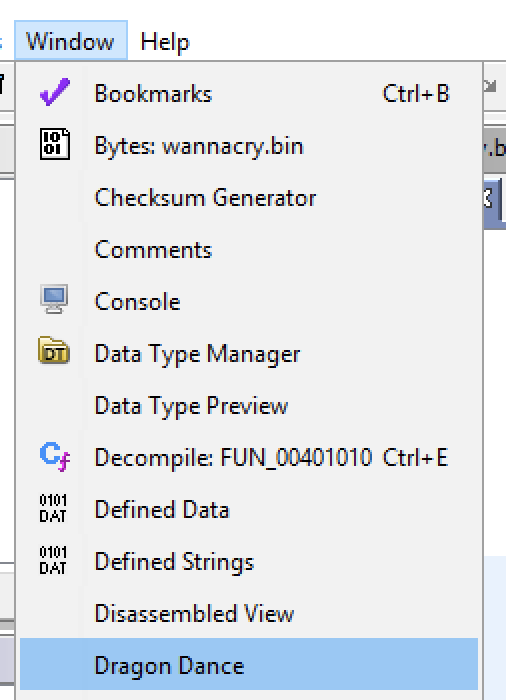 Once the Dragon Dance window is open, we can add a trace file using the green + button: 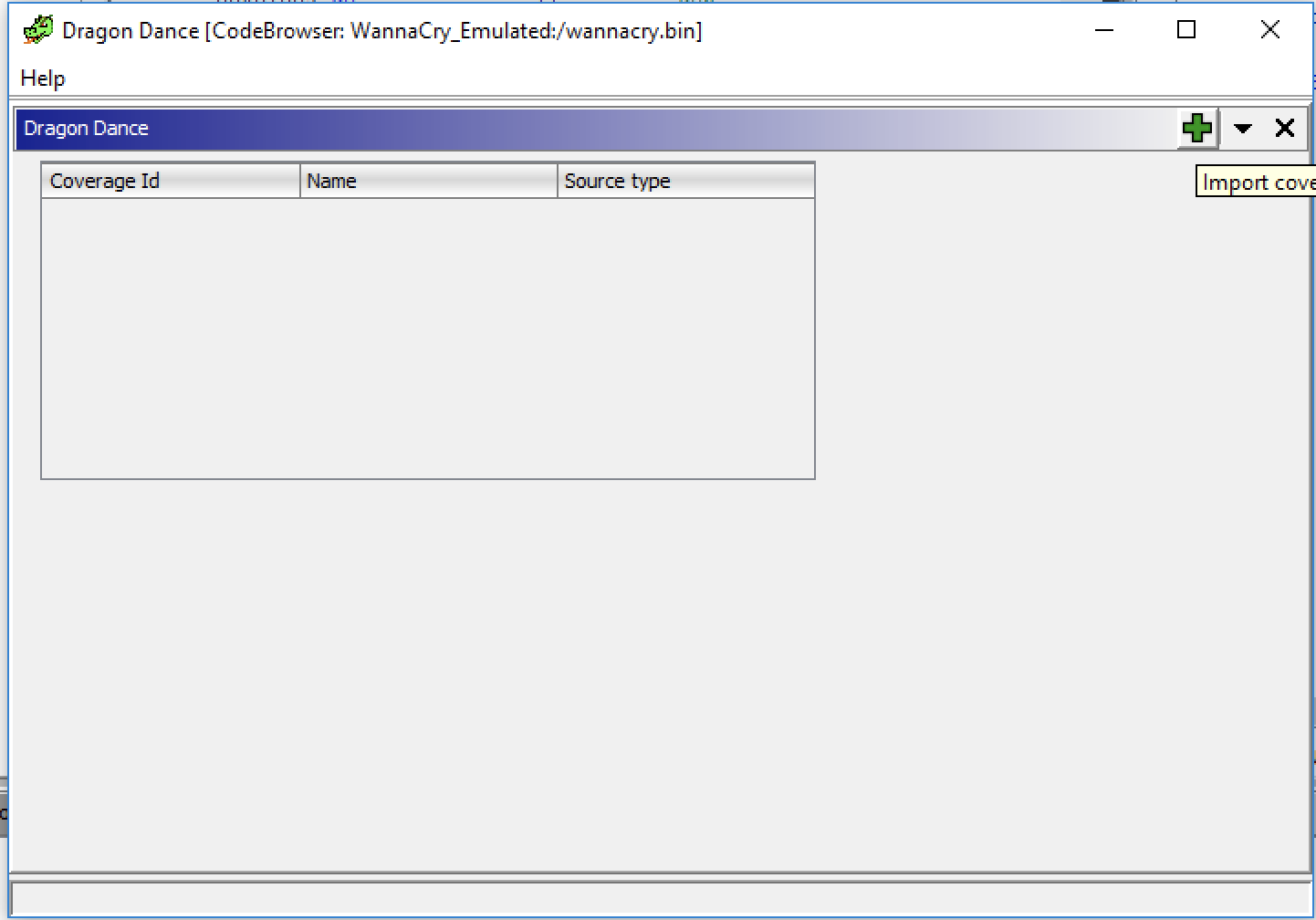 Once added, we can switch to this trace by right clicking on the trace file and clicking Switch To: 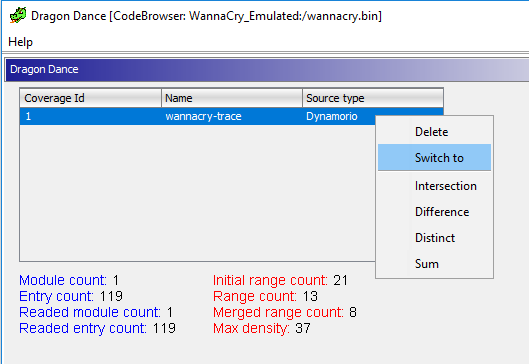 Once applied, all executed/emulation areas of the binary are now highlighted. Here we can see the killwitch function that is called by the WannaCry binary: 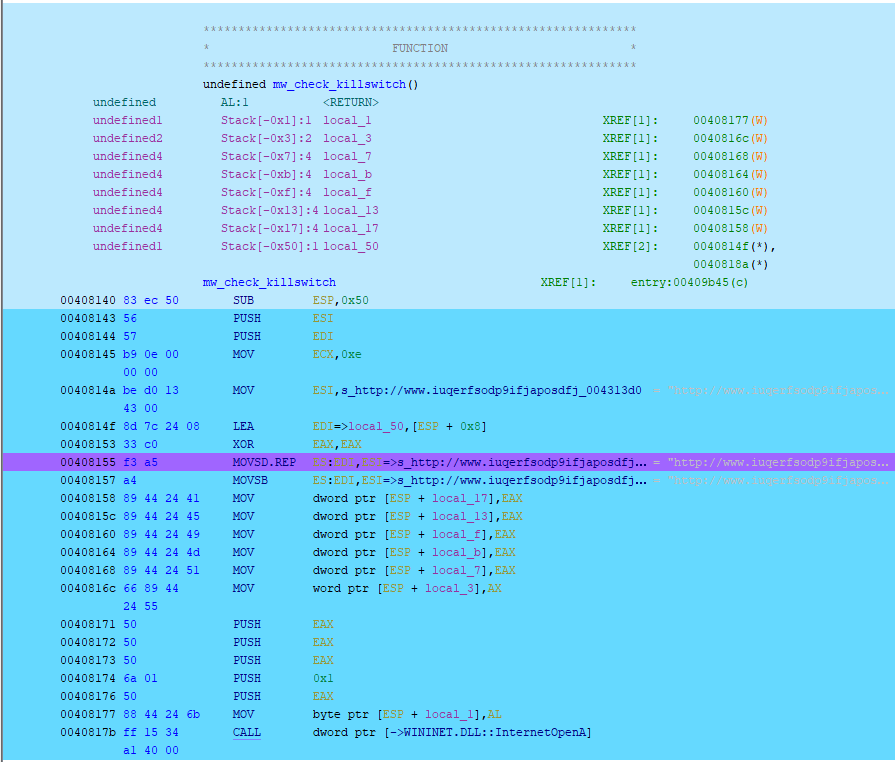 If you’ve followed along you’ll see that the emulation of the WannaCry binary dies within the sprintf function:

Below we can see no further instruction highlights in Ghidra after the call to sprintf within msvcrt.dll:

We can, however, visualize the code coverage within the msvcrt.dll dependency itself using Dragon Dance, which is where the exception occurred:

There is a limitation that I ran into though, since Qiling executes blocks of machine code with Unicorn. If an exception occurs while executing a given block (which is the case here) then it might not hit the logging callback once it produces an exception. The visualization, however, still gives you an idea of where the issue is occurring. If we wanted the binary to continue executing, we’d have to take one of two approaches:

The former requires reverse engineering of a Windows DLL, where the latter requires us to work out what sprintf does and implement it within the Qiling framework.

This is a basic example of debugging emulated output, since it’s obvious from the qltool output what is happening, however, being able visualize execution paths for more complex binaries is invaluable, since many branches can be taken to get to a certain function where an error or undefined behavior may be occurring. The Qiling framework is being actively developed and I see updates from it on Github almost daily. The core developers have done a great job at maintaining the project, and I’d suggest using techniques like these to debug APIs and contribute to the project.